Every year, the coming of winter is followed by the onset of mucus-producing disorders. While adults can evacuate them with relatives easily except at certain times, babies have significant difficulty doing so. This is due to the fact that they only cough reflexively. Thus, there is already quite an amount of accumulation when they do. In some circumstances, the use of a nasal aspirator may be beneficial.

Parents are concerned about their baby’s ability to eliminate mucous. The use of an aspirator as well as nasal washes is typically imposed either because of misgivings about its usage despite the fact that mucus cannot flow through the sponge of the central body or because of fear of causing them harm. Actually, utilizing a nasal aspirator is simple and helpful while suffering from a cold.

When should you use a nasal aspirator?

When mucus builds up, infants struggle not only to get oxygen into their lungs but also to eat.Logically, this is something to consider, especially for newborns who are very little and require frequent feedings. In these circumstances, using a nasal aspirator in conjunction with a small amount of physiological serum before consuming it can help. It’s also a good idea to apply it before bedtime to clear the passages and make it easier to sleep.

It should be mentioned that the nasal aspirator should only be used when necessary, not on a regular basis. In other words, it should only be taken when there is a true collection of mucus not as a preventative measure.

The Suavinex anatomical nasal aspirator is intended to help babies who have clogged nostrils as well as young children who do not yet know how to blow their nose. 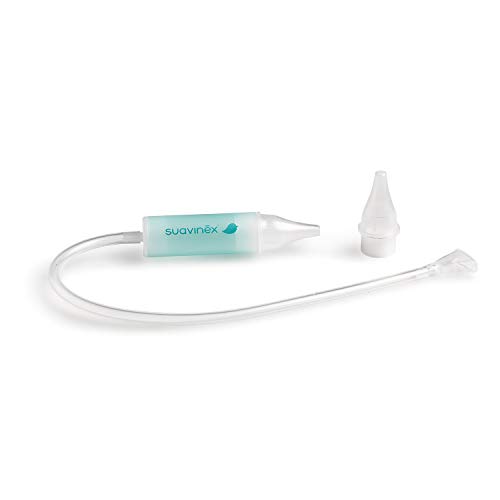 Gentle suction is used to remove the mucus without affecting the internal pressure of the ears or causing discomfort to the baby. To accomplish this, the adult inserts the hollow tip of the syringe into the nose, which has been previously hydrated with saline solution, and aspirates through the nozzle. The mucus will be collected in the foam contained in the syringe’s core portion.

10 tips to take care of your baby bottles

Detergent for bottles and teats, for your baby’s safety!